In Oklahoma history, one of the first of the deputies in Indian Territory was a former slave from Texas named Bass Reeves.

One of the first black Deputy U.S. Marshals west of the Mississippi River, Bass Reeves was commissioned in 1875 and worked thirty-two years as a marshal. By statehood in 1907, Reeves was said to be the "most feared deputy U.S. marshal to work the Indian Territory." 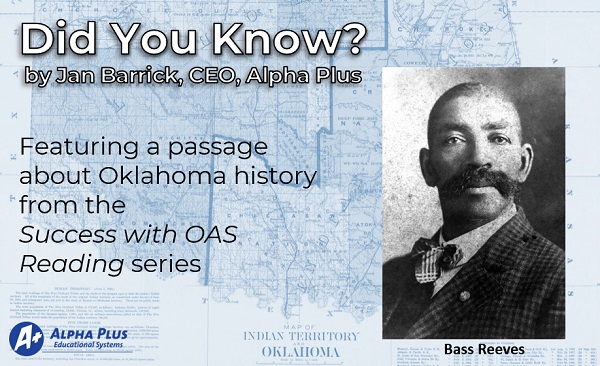 As a young man, Reeves had escaped slavery and took refuge in Indian Territory. He lived with the Cherokee, Creek, and Seminole tribes. Learning their languages and tracking skills helped him earn the position of marshal. He could detect microscopic clues when hunting fugitives. He knew the geography of the land. He was expert with both pistol and rifle, and the trajectory of his bullets always met their criminal targets. He had a reputation for catching outlaws no one else had been able to catch.

When Reeves was first appointed, Indian Territory was known as a lawless land. It was where fugitives such as thieves and murderers often hid. It was the most dangerous terrain for federal peace officers in the Old West. More than 120 law officers lost their lives pursuing criminals there before it became Oklahoma Territory. Although Reeves had been the target of numerous assassination attempts, he always escaped unharmed.

At 6’2” tall, Reeves always wore a large hat and rode a white stallion. He kept his boots polished to a shine. He was a true gentleman. That was his normal appearance. However, one of his methods for catching criminals was to undergo a metamorphosis. Working in disguise helped him obtain information and arrest criminals.

When Reeves retired from his duties as a federal marshal, he moved to Muskogee, Oklahoma. There he continued work in law enforcement with the Muskogee Police Department. He was assigned to a downtown beat. No crimes were ever committed on his beat. Today, the Three Rivers Museum in Muskogee contains artifacts from his life as a law enforcer. Bass Reeves has an indisputable place in Oklahoma history as a legendary lawman.

This passage is from our Success with OAS series. If students can answer the following questions, they may be using word parts to help define complex words as in Standard 4 of the Oklahoma Academic Standards (OAS).