Alpha Plus News Jan Barrick, Founder Did You Know Teaching Supplies, Tools, Tips Curriculum Resources Way to an A

In Oklahoma history, tourism has been central to the state’s economic development. In this story, a family races to complete a challenge and wins the game by helping a fellow traveler. 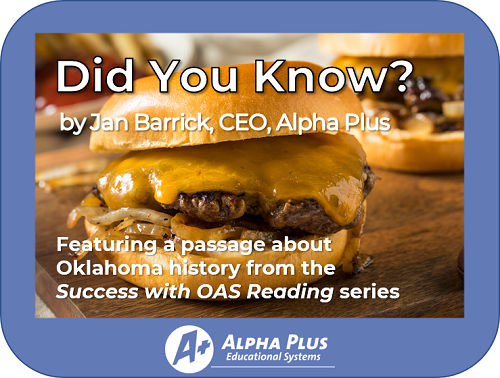 One day. Seven greasy hamburgers. Over 200 miles to drive.

The idea to complete the Burger Trail Challenge was first hatched in 2017 when Mr. Parker came across a post on a website called Only in Your State. He was proud of his home and always looking for interesting things to see and do. He was making plans before he finished reading the title, “There’s Nothing Better Than This Mouthwatering Burger Trail in Oklahoma.”

The Burger Trail started in Norman and wended through Oklahoma City, El Reno, and Edmond. Then up the Turner Turnpike for the last stops. Willa and Wesley had never been on Oklahoma’s first turnpike, nor had they been to Tulsa, Oklahoma’s second largest city. Mr. Parker saw it as the perfect adventure for his hamburger-loving children.

The first stop was a short drive from their house. Fortunately, Sooner Dairy Lunch opened 10:00 a.m. in those days, so they could get an early start. They ordered at the drive-in window and sat outside at a picnic table to eat. “Best burger I’ve had all day!” pronounced Mr. Parker. Willa didn’t point out the obvious.

The Parker family traveled to the next five stops enjoying the specialties of Tucker’s Onion Burgers and Nic’s Grill in Oklahoma City, Sid’s Diner in El Reno, and Flatire Burger in Edmond before heading up the Turner Turnpike. After each stop, one of the trio would declare it the best burger of the day so far.

The sixth stop was Billy’s on the Square in downtown Tulsa. “I can taste victory,” Mr. Parker grinned. “Just a short drive to the last stop, and we have an hour before they close.”

As they merged onto the interstate, Willa cried out from the backseat. “Lookout, Dad!” Tire rubber was flying toward the windshield. The car in front of them veered into the middle of the road. They were about to crash! All were thankful when the driver with the blowout gained control and the car thumped to the side of the road. Mr. Parker pulled slowly behind it and put on his emergency blinkers. When the driver got out of his car to talk with Mr. Parker, Willa and Wesley could see a child peering out the back window of the car.

Finally, Mr. Parker returned to the car. “They’re okay, aren’t they Dad? We can go now, right?” Wesley asked. He didn’t want to sound cold-hearted, but he was eager to get to Hank’s before closing time.

Mr. Parker explained that the man’s son, Charlie, is the pitcher on his little-league baseball team and headed to a tournament championship game. “Unfortunately, their spare is flat. His wife is coming with a new tire but won’t be here for at least an hour. By the time they get the tire replaced, the game will be over.”

Willa asked if they could drive them to the game first and still finish the trail, but Mr. Parker said it was too far in the opposite direction. Wesley pleaded, “We can’t just quit now. The Oklahoma Burger Trail isn’t finished until we’ve eaten the last hamburger!”

“Well, we can drive Charlie to his baseball game,” Mr. Parker said, “or we can drive to Hank’s Hamburgers. Either one is fine with me. You two decide.”

One hour later, Willa and Wesley were wiping grease from their fingers after finishing their seventh burger of the day. Mr. Parker groaned as he rubbed his stomach. As full as they were, all three still managed to stand and cheer when Charlie struck the last batter out. “I don’t remember concession stand hamburgers being this delicious!” Wesley exclaimed.

The family cried out in unison: “Best burger of the day!”

This passage is from our Success with OAS series. If students can answer the following questions, they are analyzing literary elements and meaning as in Standard 3 of the Oklahoma Academic Standards (OAS).

C         The family drives to Tulsa for the last two restaurants.

2.        “I don’t remember concession stand hamburgers being this delicious!”

What does the above quote reveal about Wesley’s character?

B         He had happy memories of ballfield concessions.

C         He was resentful because his plans were interrupted.

D         He was happy about the decision to help Charlie get to his game.