In Oklahoma history, a musician born in Oklahoma City in 1914 grew up to write one of the most influential novels in American history. During Black History Month, we remember the life of Ralph Ellison and the first great novel by an African-American writer, Invisible Man, published in 1952. 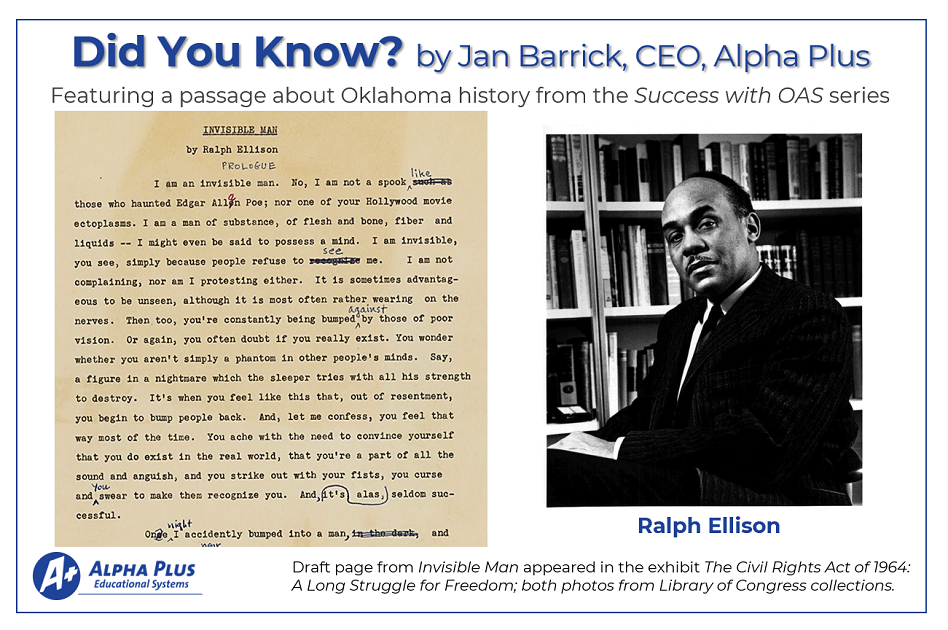 Oklahoma has a rich history of people who have made a lasting mark on their profession and the world. Ralph Ellison is one such figure. Born in 1914, in Oklahoma City, Ralph Ellison walked the halls of Frederick Douglass School and learned from early hardship that life was difficult but beautiful. Pulling from his roots and life experiences, Ellison wrote Invisible Man, one of the most influential novels in American history.

Ralph Ellison was named after his father’s literary hero, Ralph Waldo Emerson. Ellison’s father had wanted his son to be a poet, just like his namesake. Unfortunately, when Ellison was three, his father was killed in a terrible accident. After the tragedy, Ellison’s mother was forced to work multiple jobs to support her family. But even in this, Ellison could see good, as his mother brought him books to read given to her by residents in the houses she cleaned. Ralph Ellison grew up poor but was able to attend school in Oklahoma City, learned to play the trumpet, and found good mentors.

At the age of eighteen, Ellison took his passion for jazz music to Montgomery, Alabama, where he attended Tuskegee Institute. To earn income, he worked various jobs ranging from janitor to photographer, and game hunter to shoeshine boy. During the summer before his senior year, Ellison traveled to New York City so he could earn money for college. However, the Great Depression prevented him from earning an adequate amount, and he never returned to finish his schooling. It was during this trying time in New York City that Ellison’s literary career began. Influenced by Langston Hughes and Richard Wright, both important authors of the time, Ellison began work on a story that would become Invisible Man.

Published in 1952, Invisible Man is considered by many to be “the first great novel by an African-American writer that both fulfills and transcends its racial theme.” In addition to spending sixteen long weeks on the bestseller list, the book also won the National Book Award in 1952, beating out Ernest Hemingway’s Old Man and the Sea and John Steinbeck’s East of Eden. A critic summed that Ellison’s novel “explores one man’s attempts to come to terms with the myth of the American Dream and to make sense of a society in which both the oppressed and the oppressor become victims of their blindness concerning American identity and the true brotherhood of humanity.”

From Ralph Ellison’s humble beginnings in the Sooner state, he used every opportunity in life to pursue his dreams of being a musician and an author. Many might see his inability to graduate from college or complete his second novel as tragic, but these difficult experiences allowed Ralph Ellison to develop the scope of his mind. It was this mind that created a pivotal novel still discussed in classrooms across the country today.

This passage is from our Success with OAS series. If students can answer the following questions, they are learning to distinguish genres as in Standard 2 of the Oklahoma Academic Standards (OAS).
1. Using the details in “Ralph Ellison: An Oklahoma Treasure,” the reader can determine it is most likely a/an
A. drama.
B. autobiography.
C. biography.
D. poem.

2. Poetry has the genre characteristic(s) of
A. starting with “Once upon a time.”
B. information.
C. short lines and stanzas, that can include rhyming words.
D. being performed.

Stay tuned for more selections about Oklahoma’s past and present as well as opportunities for student success with OAS!
- Jan Barrick, CEO, Alpha Plus Educational Systems
For more information, visit www.alphaplus.org.

For teaching resources from the "Civil Rights Act of 1964: A Long Struggle for Freedom" exhibition, visit https://www.loc.gov/exhibits/civil-rights-act/.