Alpha Plus News Did You Know Teaching Supplies, Tools, Tips Curriculum Resources Way to an A

In Oklahoma history, Bessie Coleman was just a freshman attending the Colored Agricultural and Normal University at Langston in the early 1900s. She went on to become the first black woman and the first Native American woman to receive an international pilot’s license. Read more in this sneak peek of our 6th grade ELA book! 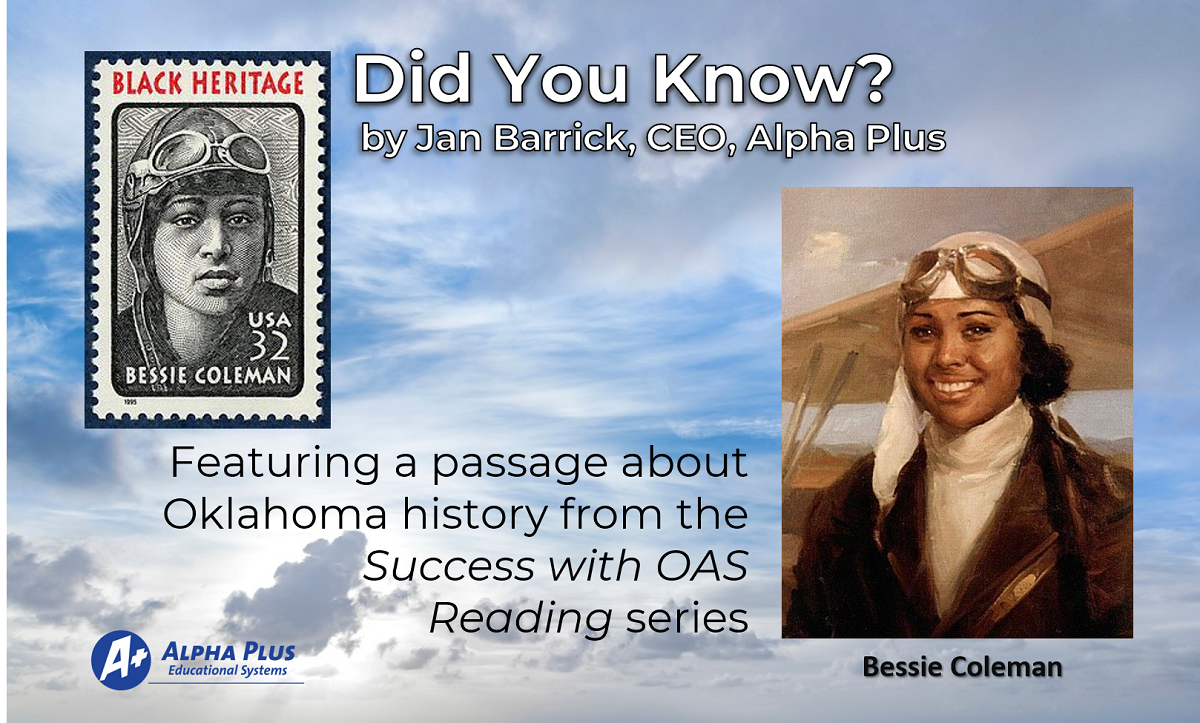 Her Dreams Were in the Sky

In 1919, 27-year-old Bessie Coleman was doing nails in a Chicago barbershop. Born in Texas, she had saved up her money and moved to Oklahoma to attend what is now Langston University. She could only afford one semester so she went to live with family in Chicago and attended beauty school.

Often, she would read articles about female European fighter pilots in the Chicago Defender. She had dreamed of flying since her brothers came back from World War I. Reading about women pilots inspired her to follow her dream.

However, black and Cherokee women like Bessie were not allowed to be pilots in the United States. No one else believed she would be able to fly.

She applied to flight schools across the US, but they all rejected her. If she wanted to fly, she would have to move to Europe, which she could not afford to do. She went to Robert Abbot, the owner of the Defender, for help. He was so impressed with Coleman that he not only sponsored her, but he also published calls for more sponsors. Finally, after studying French for a year, Coleman attended one of the best flight schools in Europe.

After graduating, Coleman returned to the US and flew in air shows across the country. Her feats earned her the name “Queen Bess,” and she used her new fame to help people like her. She refused to fly anywhere that would not allow black people and planned to open a flight school for black women.

Sadly, she died in April 1926, before opening her school. Even so, her story inspired many black pilots. One such group, the Tuskegee Airmen, would fly over and drop flowers on her grave every year. By refusing to give up on her dream, Bessie Coleman changed the world for herself and everyone like her.

This passage is from our Success with OAS series. If students can answer the following questions, they are learning to distinguish genres as in Standard 2 of the Oklahoma Academic Standards (OAS).

1. Using the details in paragraph 1, the reader can determine that this text is

2. The reader can determine the genre of this text to be

Stay tuned for more selections about Oklahoma’s past and present and opportunities for student success with OAS!
- Jan Barrick, CEO, Alpha Plus Educational Systems
For more information, visit www.alphaplus.org.

The Way to an A: Reading is the Ultimate 2 for 1 Special