Alpha Plus News Oklahoma Education Did You Know Teaching Supplies, Tools, Tips Assessment Resources Curriculum Resources Way to an A 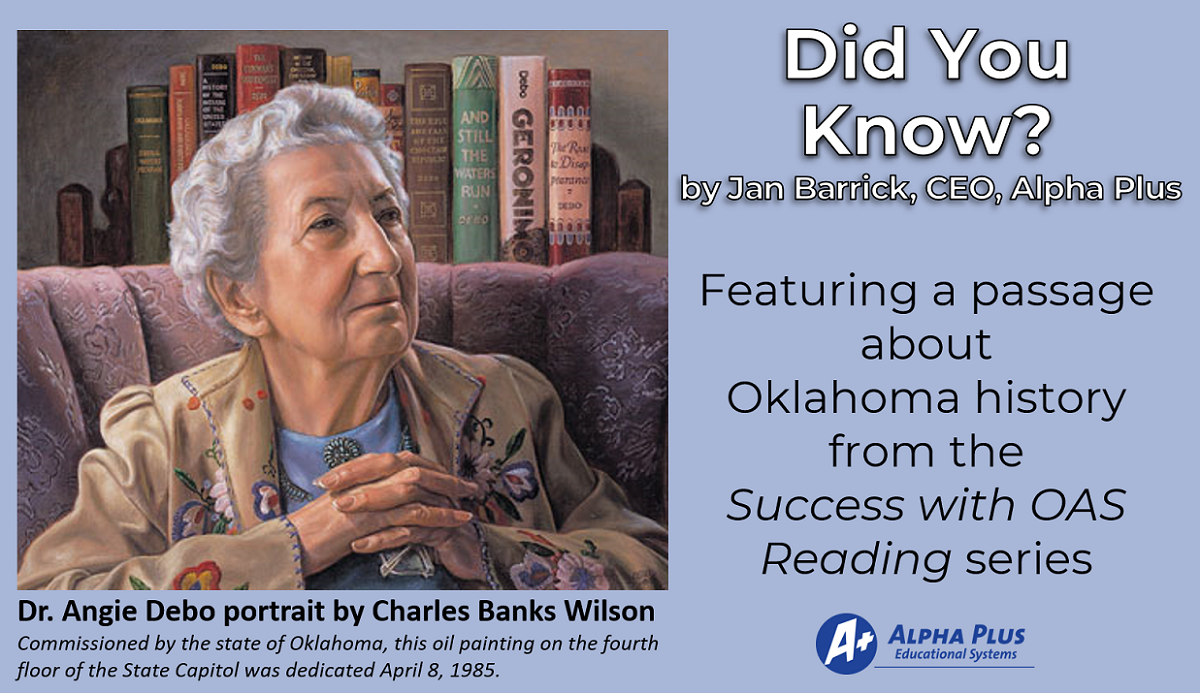 In January 1890, Angie Elbertha Debo was born in Kansas. At the age of nine, she and her family moved to Indian Territory. They settled in the small town of Marshall, about fifty miles north of what would become Oklahoma City.

In addition to school, Angie Debo loved history. She worked hard and went to the University of Oklahoma to get a degree in history. After graduation, she taught high school in Enid. Then, she did something few women did in those days: She went to graduate school. After earning a master’s degree from the University of Chicago, she returned to teaching while pursuing her doctorate.  Most historians then did research “based largely on government documents.” Yet Debo “incorporated oral history, tribal records, and anthropological studies.” This made her work in Native American history unique (Loughlin).

In the early 1930s, Debo researched the federal government’s treatment of tribes. Her first book was And Still the Waters Run. It tells how the United States and Oklahoma governments treated Native Americans unfairly in the early 1900s. Many well-known Oklahomans were upset by her work. This is believed to be why she did not teach at the college level but continued to teach in rural public schools.

Despite the trials, Debo pushed forward and continued her work in Native American history. She published nine books and many more papers and articles. Much of her work became evidence in federal cases involving tribal lands. She received many national awards and honors. Sadly, it took much longer for her to be accepted in her own state.

When she was in her nineties, Oklahoma officials acknowledged her work with awards and her portrait was hung in the State Capitol. Soon after her death in 1988, a fellow historian wrote: “Her legacy has been carried on by scores of women who have followed her in the field of history, for whom she bravely flung open wide the doors of academia” (Murphy Jr.).

Not always hailed as a hero, Dr. Angie Debo remains one of the leading Native American historians in America.

This passage is from our Success with OAS series. If students can answer the following questions, they are learning to organize information from various sources as in Standard 6 of the Oklahoma Academic Standards (OAS).

1. How many sources were used for direct quotes?

2. What author or source was quoted in the second paragraph?

Stay tuned for more selections about Oklahoma’s past and present and opportunities for student Success with OAS!
- Jan Barrick, CEO, Alpha Plus Educational Systems

Made-in-Oklahoma solutions: Do the math