In Oklahoma history, April 14, 1935, is known as Black Sunday, the date of the worst storm in Oklahoma and many states during the Dust Bowl era. In responding to a drought that became a national disaster, a president become an environmental champion.

An adaption of President Roosevelt and the Dust Bowl

The Dust Bowl was a man-made environmental disaster. It occurred on the nation’s Great Plains, as a result of years of poor farming practices. A long drought in the early and mid-1930s triggered the disaster. The winds that sweep across the plains began carrying off its dry, depleted topsoil in huge “dust storms.” Dramatic and frightening, these storms turned day into night as they destroyed farms. 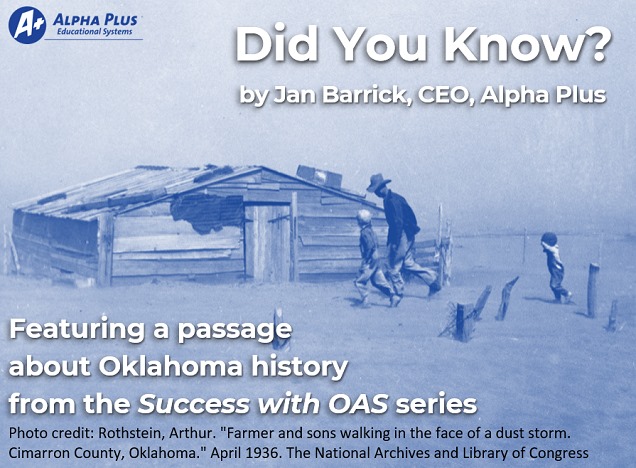 When Franklin D. Roosevelt became President in 1933, he faced many challenges. Saving America’s farms was one of the hardest and most important tasks. His actions were an example of how a government should respond to an environmental disaster –– by using research, community action, and soil and water conservation programs.

President Roosevelt addressed the problem in many ways. The Farm Security Administration promoted soil conservation. They resettled farmers on more productive land. The Soil Conservation Service helped farmers enrich their soil and stem erosion. The Taylor Grazing Act controlled grazing. One of his programs fought wind erosion by planting over 200 million trees in a belt running from Bismarck, North Dakota, to Amarillo, Texas. This vast windbreak weakened the Dust Bowl’s destructive winds. It remains one of the greatest environmental success stories.

Photographs from April 14, 1935, help people fully understand the devastation of this drought. That day became known as “Black Sunday.” The dust storm that day blew away 300 million tons of fertile topsoil. Oklahoma was the hardest hit, but its force was felt in many states. The dirt and dust fell to the ground as far away as New York City.

While President Roosevelt is often credited with bringing the United States out of the Great Depression and leading the Allies to victory in World War II, his role as a great environmental champion is sometimes overlooked.

[Related animated video and historical photos from the National Archives available at https://fdr.blogs.archives.gov/2018/06/20/fdr-and-the-dust-bowl/ ]

This passage is from our Success with OAS series. If students can answer the following questions, they will be on their way to mastering academic vocabulary to infer meaning under OAS 4.R.1 in the Oklahoma Academic Standards.

Tweet
Decisions Must Address Local Needs Now
Did You Know?