In Oklahoma history, few stories are more tragic than the journey of more than a thousand miles that brought Native American tribes to what would become the 46th state. The following selection is courtesy of the Oklahoma Historical Society. 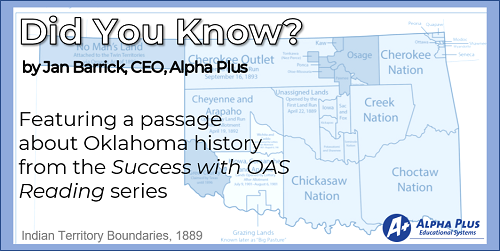 The term Trail of Tears refers to the difficult journeys the Five Civilized Tribes took during their forced removal from the southeast. During the 1830s and 1840s, the Cherokee, Creek, Choctaw, Chickasaw, and Seminole were all driven from their ancestral lands. They were relocated to Indian Territory or present Oklahoma. The removal of American Indians began long before the nineteenth century. However, the Trail of Tears is mostly associated with the forced removals that took place after the 1830 Indian Removal Act.

The Trail of Tears differed for each of the nations, but all Indians suffered. The relocations usually began when federal troops rounded up those who resisted removal. The cruel journeys, usually more than one thousand miles, lasted several weeks. A shortage of wagons, horses, food, and other supplies made the journeys difficult. The U.S. government did not provide enough supplies to sustain the travelers during their march or after their arrival.

A very harsh winter plagued the Choctaws, the first nation to face the forced migration. Leaving in several groups in 1831, more than fourteen thousand Choctaws left Mississippi. French observer Alexis de Tocqueville described one journey as a “sight that will never fade from memory.” He noted that “The snow was hard on the ground, and huge masses of ice drifted on the river. The Indians brought their families with them. Among the wounded were the sick, newborn babies, and old men at the point of death. They had neither tents nor wagons, but only some provisions and weapons. Hundreds of Choctaws died.”

For other Indians, disease and malnutrition proved equally devastating. After losing the Creek War of 1836-37 with the United States, more than 14,500 Creek Indians faced the additional outrage of being forced to leave their lands. They were marched west, often in chains. Several hundred Creeks died during the journey. Another thirty-two hundred died from disease, malnutrition, and exposure after their arrival in Indian Territory. Disease also took a toll on the Chickasaw. They lost more than five-hundred men, women, and children to smallpox. The Cherokees’ experience was perhaps the most severe. As many as one out of four Cherokees died because of their westward journey.

This passage is from our Success with OAS series. If students can answer the following questions, they are summarizing and paraphrasing ideas as in Standard 2 of the Oklahoma Academic Standards (OAS).

1. What is the main idea of this passage?

A. The Trail of Tears was a tragic event imposed upon the Indians by the US government.

B. The Trail of Tears affected mainly the Cherokee, Choctaw and Chickasaw.

D. The Trail of Tears never should have happened.

2. When writing a summary of this passage, all of the following details should be included except

A. The Trail of Tears is mostly associated with the forced removals that took place as a result of the 1830 Indian Removal Act.

B. The tribes suffered from shortage of wagons, horses, food, and other supplies during the march.

C. Alexis de Tocqueville wrote that, “The snow was hard on the ground, and huge masses of ice drifted on the river.”

D. As many as 1 out of 4 Cherokees died because of their forced journey west.

For more selections about Oklahoma’s past and present plus opportunities for student Success with OAS visit https://alphaplus.org.