DID YOU KNOW: The Musical "Oklahoma!" 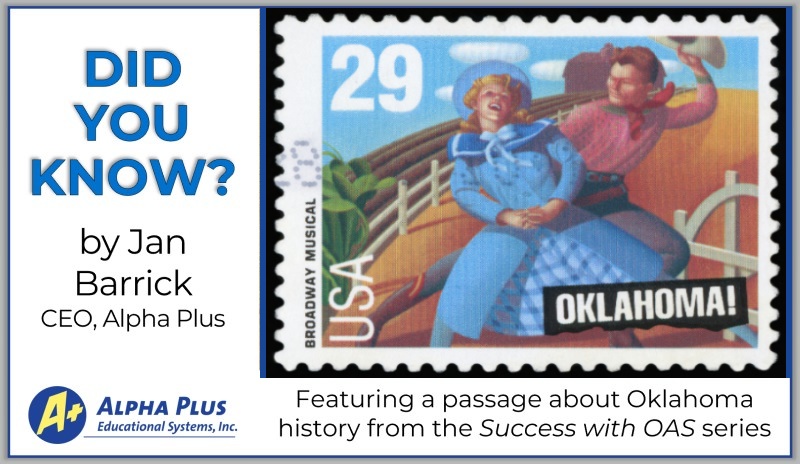 In Oklahoma history, the musical Oklahoma! is one of the most popular Broadway musicals of all time. Based on the 1931 play, Green Grow the Lilacs, the musical became a major motion picture in 1955.

From Stage to Screen: Oklahoma!

Today, musicals are popular on both stage and film. Musicals like Wicked, The Greatest Showman, Hamilton, and The Lion King are popular today. Yet one of the most popular musicals of all time is the only one named after a state: Oklahoma!

The new play opened on Broadway in 1943. Just 16 months earlier was the attack on Pearl Harbor. The mood of the country was dark given the hardships of World War II. Americans were away at war. The United States was starting to ration shoes, food, and gas. It was assumed a new musical at this time – especially one about farmers and cowboys – would be a failure. They were wrong.

Oklahoma! turned out to be just what America needed! Besides brilliant mus

ic and dancing, there was a wonderful story. This was the first Broadway show to combine storytelling with dancing and music. On opening night, many seats were empty. But those who did attend found themselves cheering a surprise hit.

The curtains open to the song “Oh, What a Beautiful Mornin’." This peaceful start was unlike the dramatic opening of most plays at the time. It was just what a war-time audience needed. Agnes DeMille, who produced the dance numbers, saw how the audience reacted to the first song. She said, "It produced a sigh from the entire house that I don’t think I’ve ever heard in the theater. It was just, ‘aaahh...’ It was perfectly lovely, and deeply felt.”

But the play is not all positive, sunny music. It shows what life was like in Indian Territory before statehood. Tension between farmers and ranchers of the time is reflected in both humor and drama. The play ends with the song Oklahoma! – a standard in the lives of Oklahomans still today.

This passage is from our Success with OAS English Language Arts series. If students can answer the following questions, they are learning to summarize texts as in Standard 2 of the Oklahoma Academic Standards (OAS).

1. All the following are qualities of a summary except:

2. Why did the author include Agnes Demille’s quotation in paragraph 4 as a supporting detail?

Stay tuned for more selections about Oklahoma and opportunities for student success with OAS!