DID YOU KNOW: The Oklahoma Flag

Oklahoma Education Did You Know 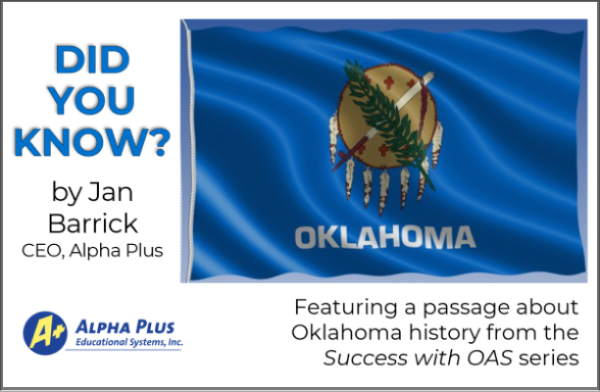 In Oklahoma history, Louise Fluke used skills honed at the Chicago Art Institute to design a new Oklahoma state flag in 1925. In this selection, we learn why our flag changed and how research fostered a new sense of pride.

Oklahoma became a state in 1907, and four years later the first state flag was approved by the legislature. Solid red with a white star in the center, it featured a blue numeral 46 to represent the forty-sixth state. The design became unpopular after the 1917 Russian Revolution because it was similar to a communist flag. In 1924, the Daughters of the American Revolution held a statewide contest to choose a new flag.

Born Louise Funk in Arkansas in 1900, “Oklahoma’s Betsy Ross” moved with her family to Shawnee, Oklahoma, the next year. She studied art as a young girl and continued her studies at the Chicago Art Institute. She returned to Oklahoma and married George Fluke, Jr., in 1924.

After hearing about the flag design contest, Mrs. Fluke didn’t just draw a design. First, she did some research that included meeting with the secretary of the Oklahoma Historical Society. She studied Native Oklahoma history, lore and artifacts. She wanted to create a flag that represented the history of the state.

The flag she designed has a blue field symbolizing loyalty. The color blue came from the flag of the Choctaw Nation.

Next, she chose an Osage warrior shield to be in the center of the flag. It is a traditional bison-hide shield, which represents defense of the state.

A calumet (or peace pipe) and an olive branch cross over the shield. These stand for the unity of people living in peace. The six crosses on the shield represent stars, which are a common theme in Indian art. The shield is also decorated with seven eagle feathers.

On April 2, 1925, this design was selected the best, and became the official flag of the state of Oklahoma. In 1941, the name “Oklahoma” was added under the center shield. In 1988, the legislative resolution HCR1110 defined the colors and other details for the flag. To ensure the flag stayed true to the original design, a Boy Scout leader worked with his representative in the house to add that resolution to the state statutes in 2006 (25 OS § 91).

Louise Funk Fluke had become the “Betsy Ross of Oklahoma.” Her talent and studies helped her create a flag that gives all Oklahomans a sense of pride.

This passage is from our Success with OAS English language arts series. If students can answer the following questions, they are learning to research and refine knowledge as in Standard 6 of the Oklahoma Academic Standards (OAS).

We Use Data to Help Schools on the Way to an A!