Alpha Plus CEO Jan Barrick says the federal ESEA designations lists issued on Feb. 13 show one third of the schools (20 of 61 or 33%) served by Alpha Plus in 2012-13 were identified as 2013 Reward Schools by the Oklahoma State Department of Education. In addition, a “Targeted Intervention” and a “Priority” school helped by Alpha Plus last year improved math and reading test scores enough to be removed from the ESEA list of low-performing schools.
Download fact sheet (PDF). 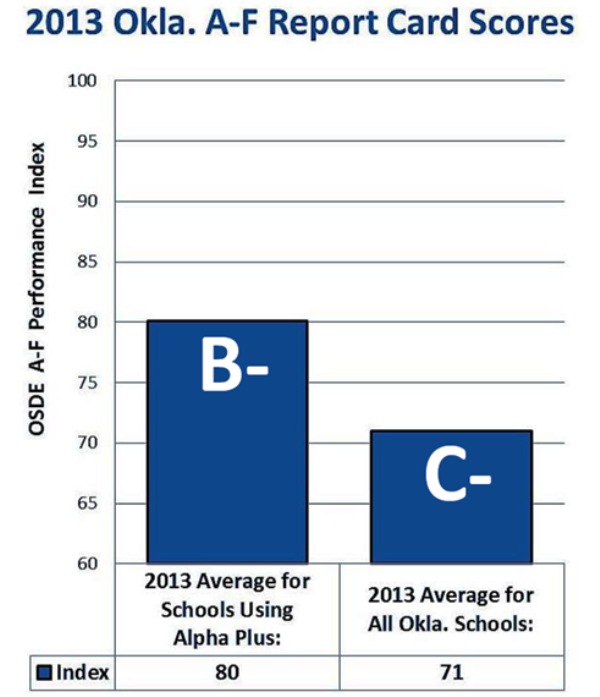 Alpha Plus Educational Systems CEO Jan Barrick says the A-F Report Cards issued by the State Department of Education (SDE) Wednesday (Nov. 6, 2013) show the average for Alpha Plus-partner schools was 80 percent (B-) compared to 71 percent (C-) statewide. For 2012, the Alpha Plus average was a 3.00 GPA, also a B, compared to the 2.66 state average, a C.
Download the full press release.

Reports compiled from this year's data issued by the Oklahoma State Department of Education (OSDE), show an even larger number of Alpha Plus contracted schools identified as "Honor Roll" schools. (Click on image to open larger image in browser.)
Download the full Honor Roll fact sheet for 2013.

Barrick issued her second annual Alpha Plus Honor Roll based on the 2013 results. “We helped 61 schools in the 2012-13 school year and nearly half received As or Bs on their state report cards, with just one-fourth performing below the state average,” Barrick said. “While we are proud of the progress ALL schools working with Alpha Plus, we want to annually honor the educators and students at schools achieving above-average results.” Alpha Plus serves approximately 500 teachers and principals in 24 counties and scored benchmark assessments for more than 15,000 students statewide last school year.
Download the full Fact Sheet Summary for 2013

At Alpha Plus, We Use Data to Help Schools Make the Grade!

Our system helps teachers and administrators identify students who need remediation in real time. We even pinpoint the specific OAS objectives that need improvement!

That's why Alpha Plus schools have outperformed the state average every year of the A-F Report Cards.